Dr. Asad Abbas Shah is one of the leading and pioneer sports physicians in Pakistan who has represented Pakistan at various National and International sports venues. He is currently serving as Sports Physician in Pakistan Hockey team and Attending Sports Physician in the Department of Physical Medicine and Rehabilitation Mayo Hospital Lahore. Pakistan Hockey Team has been on victory stand many times during his attachment with the team as physician. He has also served as Sports Physician with Pakistan Squash Federation, Pakistan Boxing Federation, Wrestling Federation of Pakistan and Pakistan Baseball team. He has worked in close collaboration with Pakistan Olympic Association, Pakistan Sports Board and Punjab Olympic Association.

Dr. Asad received his medical degree from Allama Iqbal Medical College Lahore in 1991 and completed his Diploma in Sports Medicine and Certification in Sports Injuries Management from Osaka Japan. His first national affiliation was with Pakistan Cricket Board (PCB) in 2000. Later, in 2002, he joined Pakistan Hockey Team and continues to provide his services there. His unique and dynamic expertise has gained recognition in mainstream media as well. Dr. Asad Abbas has hosted morning T.V shows for health and exercise awareness. His articles have been regularly published in leading Newspapers. He has organized various local and national events related to sports injuries and nutrition, and has conducted various workshops on doping and sports injury prevention. He was also the lead organizer of First National Sports Medicine Conference. 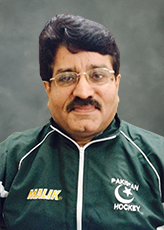