During his stay at AFIRM, Dr. Mahmood was actively involved in the development and initial establishment of the institute. He has been an Instructor at Armed Forces post Graduate Medical Institute (AFPGMI) as well. In 2002, Dr. Mahmood served as a member of the federal government technical committee along with the Ministry of Health and Social Welfare to follow up on National Policy for Persons with Disabilities. During Peshawar tenure (2009-2012) Dr. Mahmood was actively involved in research on acute flaccid paralysis secondary to polio epidemic in the region in collaboration with WHO surveillance and diagnostic teams. He also represented Pakistan at International Consensus Conference on the International Classification of Functioning (ICF) Core Set for Spinal Cord Injury. This was a joint Project by Swiss Paraplegic Research, ICF Research Branch, World Health Organization (WHO), the International Spinal Cord Society (ISCoS) and the International Society of Physical and Rehabilitation Medicine (ISPRM). In 2011, he was a part of the six members Army Medical Corps delegation to Australia as a joint health initiative between the two countries.

He likes to spend times with his family and friends. 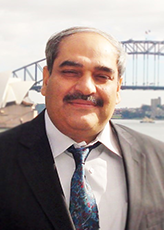