Dr. Babar joined Shaikh Zayed Postgraduate Medical Institute Lahore (SZPGMI) in 1988 as Assistant Professor and Head of newly created Department of Physical Medicine and Rehabilitation. She established comprehensive facilities for Physical Medicine and Rehabilitation at Shaikh Zayed Hospital and developed it into a center of repute. She arranged several seminars in PMR for the awareness of this new specialty and initiated rotation in PM&R for orthopedic and medical residents. She strongly believed and advocated interdisciplinary teamwork approach in rehabilitation management of patients.

In December 1996, on the request of Dean Children’s Hospital and Institute of Child Health (CH&ICH) and Punjab Health Department, Dr. Babar was invited on deputation to develop a state-of-the-art new facility in Physical Medicine and Rehabilitation. At the CH&ICH she was successful in developing first of its kind Department of Pediatric Physical Medicine and Rehabilitation including electrodiagnostic facilities and neurorehabilitation. She also assisted in laying down foundation for the B.SC. physiotherapy program under the umbrella of School of Allied Health Sciences. The department of PM&R at CH&ICH was one of the initial residency training programs to be recognized by the College of Physicians and Surgeons Pakistan (CPSP) for training in PM&R. Dr. Babar has been a supervisor, mentor and examiner for several postgraduate students in this field and has been on the faculty of PM&R of CPSP.

In August/September 1999 the CPSP invited Dr. Babar to be part of a task force for the development of a structured training program in PM&R. She actively assisted Dr. S.R. Kirmani and other senior colleagues in developing the residency-training program and its core curriculum. In recognition of her outstanding services to the CPSP and specialty of PM&R, the College awarded her Honorary Fellowship of the College of Physicians and Surgeons Pakistan. She has also been the member of Islamic Medical Association North America.

After completion of deputation period at CH&ICH Dr. Babar returned to SZPGMI in 2001. She took early retirement from SZPGMI in 2004. She has since maintained her private practice at Babar Medical Center in Model Town, Lahore. She has special interest in Electrodiagnosis and rehabilitation of children with neuromuscular disorders. She receives requests for electrodiagnosis of complex neuromuscular diagnostic issues from all over Pakistan. 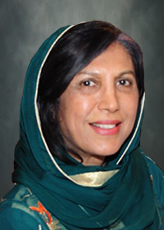