Dr. Pervaiz Hasan Khan Niazi is one of the pioneers of Physical Medicine and Rehabilitation in Pakistan who has significant contribution in laying the foundation of rehabilitation services in the country. His services in disability care are well acknowledged at national level. In 1980s, he organized the rehabilitation facilities in military sector and contributed in introducing Rehabilitation Medicine in medical corps of armed forces. The infrastructure of Armed Forces Institute of Rehabilitation Medicine (AFIRM) Rawalpindi was established during his tenure. It later expanded to include the current facility which was inaugurated in 2001. AFIRM is the largest rehabilitation center in Pakistan providing state of the art rehabilitation services and is also the leading training institution in the country. Dr. Niazi has supervised the development of one institute and ten departments of Rehabilitation Medicine across various military hospitals across Pakistan. He was awarded Sitara-e-Imtiaz (Military) which is one of the premier national awards granted for the highest degree of service to the state. He is currently the Vice President of Pakistan Society of Physical Medicine and Rehabilitation (PSPMR).
Dr. Niazi graduated from Nishtar Medical College, Multan in 1968. He was commissioned in Pakistan Army in 1969 and retired in 2005 as Brigadier after 37 years of military service. After completing his Internship at Nishtar Hospital Multan, he served as General Duty Medical Officer for 5 years. In 1975, he completed Diploma in General Surgery from Armed Forces Post Graduate Institute (AFPGMI) and served in Military Hospitals in Khamis Mushayt and Sharorah, Saudi Arabia for 3 years. On his return to Pakistan, he continued to serve as General Surgeon in various military hospitals for almost a decade. During this time, he was affiliated with Army Medical College and AFPGMI as academic instructor in Gross and Applied Anatomy.
In 1980s he was committed to the task of promoting rehabilitation services at Armed Forces Institute of Rehabilitation Medicine (AFIRM) in coordination with Dr. Muhammad Afzal Kiani who was the first commandant of the institute and his predecessor. In 1984, Dr. Niazi went to Austria for advance training in Rehabilitation Medicine at Institute of Physical Medicine, General Hospital, Vienna. He continued further training in England at Regional Spinal Injuries Center Southport, National Spinal Injuries Center Aylesbury and Royal National Orthopedic Hospital London. He became the Fellow of International College of Surgeons (FICS) USA in 1986 and completed his Diploma in Medical Rehabilitation from Royal College of Physicians, London in 1989. In 1986, NCS/EMG was introduced at AFIRM and by the year 2004, around 40,000 NCS/EMGs were performed at the facility
He served as Consultant in Rehabilitation Medicine at various military hospitals with most of his tenure at Combined Military Hospital Rawalpindi and AFIRM. During the same time, he continued to provide academic services as Instructor in Rehabilitation Medicine at AFPGMI and AFIRM. He also remained a departmental representative at the Federal Public Service Commission of Pakistan for 7 years. Dr. Niazi served as Commandant of AFIRM from 1996 to 2004. In 1998, he was awarded the fellowship of College of Physicians and Surgeons of Pakistan (FCPS). Later, he visited various rehabilitation centers in Australia and also served as observing examiner at the fellowship exam for Rehabilitation Medicine under Royal Australasian College of Physicians. He coordinated with other rehabilitation physicians in military and civil sector to incorporate residency training at Armed Forces Institute of Rehabilitation Medicine under the auspices of College of Physicians and Surgeons of Pakistan (CPSP). He has trained maximum number of Physiatrists in the country as the residency program director. The first 16 FCPS trained Physiatrists in Pakistan Military completed their training under him. Dr. Niazi also prepared the Precis for Physiotherapy Classes I-III Technicians in Pakistan Armed Forces. During his tenure, 87 paramedics were also trained for Physiotherapy Class-1 Tech at AFIRM. He served as faculty member and examiner at the CPSP in the specialty of Physical Medicine an Rehabilitation.
Dr. Niazi continued to serve as instructor at AFIRM and AFPGMI for five years after his retirement in 2005. 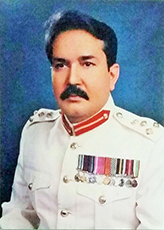