Dr. Syed Rafi uddin Ahmad Kirmani is the Patron-In-Chief of Pakistan Society of Physical Medicine and Rehabilitation. He is also the Dean of Physical Medicine and Rehabilitation (PMR) at College of Physicians and Surgeons of Pakistan and is one of the pioneers who introduced the specialty in the country. Dr. Kirmani holds a long standing affiliation with disability care and his medical career spans over five decades. He graduated from Dow Medical College, Karachi in 1958 and finished his internship in Internal Medicine at Jinnah Hospital Karachi. In 1962, Dr. Kirmani was awarded WHO Fellowship in Rehabilitation Medicine in Copenhagen, Denmark. The program included rotations in Sweden and England as well. On his return to Pakistan, he joined Orthopedics under Professor Z K Kazi and was appointed as Assistant Director of orthopedic workshop in 1963. He introduced post-polio bracing and also initiated prosthetic manufacturing under his supervision. He went for further training in prosthetic management in Copenhagen in 1964. During his efforts to promote the field of Prosthetics and Orthotics, he visited various prosthetic facilities in the US and Europe.
Dr. Kirmani’s initial focus was to promote and train rehabilitation clinicians and to establish academic centers. His contributions led to establishment of Bachelors in Physiotherapy (BSc) program at the Karachi University in 1964. In 1968, all the rehabilitation sections were integrated into Department of Physical Medicine and Rehabilitation. In 1973, his contributions also led to establishment of Occupational Therapy school in Pakistan in liaison with consultant from the United States. Dr. Kirmani also laid the foundation of Speech and Language Pathology School. A school for special education was also started at this institute with main focus on autistic children. In the early 90s, Dr. Sidney Licht invited Dr. Kirmani to establish a regional chapter of PMR in South Asia for The International Rehabilitation Medicine Association (IRMA), for which he was elected as the secretary. He is also one of the founders of Pakistan Society of Rheumatology. Dr. Kirmani and Dr. Samad took the lead role in establishing the Pakistan Society of Rheumatology which got affiliation with APLAR (Asia Pacific League of Associations of Rheumatology). In subsequent years, Rheumatology got recognition in Pakistan and the society affairs were handed over to the successors in the specialty.
Dr. Kirmani has been one of the pioneers in rehabilitation research in Pakistan. He got a PL 480 Grant from the United States Department of Health and Education in Prosthetic Management. He also introduced scientific writing in rehabilitation medicine and his publications laid the foundation of rehabilitation research in the country. Dr. Kirmani has represented Pakistan at various national and international platforms for scientific presentations and as a guest speaker. Many of the international figures in rehabilitation had the privilege of coordinating disability care with Dr. Kirmani. Along with other senior associates in the country, he established liaison with well-known clinicians from abroad to facilitate development of Physical Medicine and Rehabilitation medicine in Pakistan. In the late 90’s, College of Physicians and Surgeons of Pakistan (CPSP) invited Dr. Kirmani to review the possibility of starting residency training in Physical Medicine and Rehabilitation. He visited Baylor Institute of Rehabilitation Medicine in the U.S and met Dr. Martin Grey Bois who facilitated in development of curriculum for residency training. With the help of other senior colleagues in rehabilitation medicine across the country, FCPS residency program was launched and the first batch of residents graduated in 2001. Dr. Khalid Jamil Akhtar, Dr. Pervez Hassan Khan Niazi, Dr. Muhammad Afzal Kiani and Dr. Abdul Moeed Kazi played a crucial role in laying the foundation for PMR in Pakistan. They were later joined by Dr. Mumtaz Jabeen Babar on her return from U.S.
Dr. Kirmani served as a faculty member at Agha Khan Medical College for four years. He was honorary lecturer for teaching undergraduate medical students on various aspects of disability and rehabilitation medicine. He took early retirement in 1999 and later joined MA Ayesha Memorial Center for Rehabilitation (MAMC) Karachi, where he is currently working as a Consultant Physiatrist and Medical Director.
Dr. Kirmani enjoys music and likes to watch sports 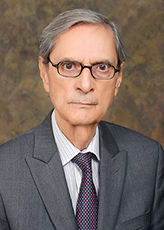